Scene 1: In the opening scene we meet six characters in their online environment. Amber is chatting with a stranger, “Captain Jack”. Daniel is blogging and Matt is sending a text message while Josh and Sarah meet in a chat room.

Scene 2: At school Matt and Daniel get into an argument about music. Daniel posts a survey on his myspace bashing Matt’s favorite band. Amber and Sarah are talking in the hallway when they meet Josh. Sarah and Josh recognize each other from online and become friends. Amber cautions Sarah to put their friendship before her feelings with Josh.

Scene 3: Two weeks later, without Amber’s knowledge Sarah begins to date Josh. Amber suspects that there is something going on with Josh and Sarah, and she shares her feelings online with the mysterious “Captain Jack”. We learn that “Captain Jack’s” real name is James and he encourages Amber to get revenge. 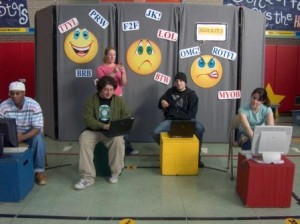 Scene 4: Matt is angry with Daniel about the music incident and Amber is mad at Sarah for “stealing her boyfriend”. Matt and Amber devise a plan to see who can get the best revenge. The winner is determined when Daniel or Sarah publicly embarrass themselves in the cafeteria.

Scene 5: Amber creates a fake screen name to disguise her identity and sends Josh a hateful e-mail about Sarah, including a picture of a naked woman with Sarah’s face photoshopped onto it. Not realizing that Matt is involved, Josh and Sarah tell him about the e-mails. Matt slyly suggests that Daniel is behind it. Josh and Sarah leave to confront Daniel while Matt and Amber enjoy their success.

Scene 6: Josh creates a fake screen name. He finds Daniel online and threatens him for messing with his girl. Daniel denies it which angers Josh all the more. Josh tells Sarah that he will persuade all of his friends to send Daniel hundreds of harassing text messages.

Scene 7: James and Amber are chatting online again. Amber shares with James the anti-Sarah website that Matt created. Daniel is frustrated, and we learn of steps he is beginning to take to combat cyber bullies. Matt shares with Josh and Sarah the anti-Sarah website, but he claims he does not know who created the site. To get even, Matt suggests he and Josh shoot a video of Daniel in the locker room and post it on Youtube.

Scene 8: In Daniel’s blog we learn more ways to deal with cyber bullies. Matt and Daniel chat online and Matt reveals that he is behind all the things that have been happening to him and he won’t stop until Daniel makes a fool of himself in the cafeteria, making him winner of the contest. Amber and James are chatting on the computer; James states how he could be Amber’s best friend – which freaks her out.

Scene 9: Matt and Josh share with Sarah the video they took of Daniel. Josh confronts Daniel but Daniel blames Matt. Sarah and Josh realize they were wrong in attacking Daniel and apologized; however, Josh now wants to go after Matt for his trickery. Josh and Sarah plan to steal Amber’s password.

Scene 10: Amber and James are on the phone. James attempts to pressure Amber into a face to face meeting. James then reveals that he is 42 years old and knows where Amber goes to school and that he has even driven by her house. Amber is freaked out and hangs up. The next day in school amber asks Daniel if he is really “James”. He says no and explains how James probably got all the information from clues on her myspace. Daniel encourages Amber to contact the police.

Scene 11: Josh and Sarah falsely make amends with Amber and steal her password. They then use her account to send the same naked photo but with her head on it to everyone in school. They then falsely report Matt as a rapist on a website.

Scene 12: Days pass and there are multiple confrontations with many accusations and misunderstandings. Due to the severity of Josh and Sarah’s retaliation, they receive severe punishment. Amber and Matt appear the victims but are still rebuked for their decisions. In addition, Matt learns that his preferred college denied his application because of the contents of his myspace. Amber and Sarah begin to restore their friendship and they all agree that communication is better left offline.